Peter Kolbe worked at the Cape between 1705 and 1713 and gives us some interesting details of the old beers and wines of the time. Kolbe's account was first published in German in Nuremberg in 1719. I have tried to translate the old Dutch text (1) from 1727 as best as I can. The earlier German text (2) is unknown to me. I've kept the chaotic style and punctuation as they are.
Frederik Ruis

The Dutch, they send very much Brunswykse, Zerbster en other strong Dutch, Lubecks, Bremens etc, beers to East-India, the bad and thin beers last only a short while, as which the English send to Jamaica, they know this trick, I think, much better; because after they they've put those beers in Holland in good oaken barrels with iron hoops, have crossed, and cleared them of much sediment, they do, as far as I've seen, nothing else, than keep the barrels filled with the same beer or if lacking, with any other good beer, and keep closed, as tight as possible, to keep the outside air from harming it, or make the beer sour or to go wrong, even when by the scorched air or under the equator they were altered.
With this way of keeping the beer, the Dutch are very comfortable, although it cannot be denied, that sometimes a barrel decays or goes sour, or leaks away. This has another reason however, which I would be afraid to discover, were the case known and public. When many barrels with those beverages are stacked up in the ship, it's hard to get to the bottom ones, to fill them properly, or to inspect them.
Also not all barrels are new, and often punctured, which over time let the fluid run out. Next it happens sometimes, that the Cargo hold workers or those that labour in the ships hold, who are normally sailors, every now and then tap out of the barrels and booze out, and one therefore never sees any moisture under those barrels, as to conclude that they were leaking.
But who would want to make the effort, all cunning tricks of the crew, to take away from others their belongings, to get it on paper? because that's very well known to the Captain and others in command; for they point them out themselves right from the start, which barrels in particular, and which belong to the Company, and also normally call their special barrels Sanctum Sanctorum or Holy of Holiest, and thus indicate, that they can drink out of the Companies barrels but not out of theirs.
Concerning the wines; those should not be oiled or sulphured, for after the sulphur is gone it ferments violently, and therefore decays rapidly. Weak and bad wines have the same fate, although old, because they lack the force of the spirit, to keep them good. Old and heavy wines as French, Rhine, etc., although they're altered slightly under the equator or in the scorched air, and look like unclear buttermilk, and seem to have an altered taste, still get back to their old virtue in freshness, clear and taste, if one next to the normal care, takes time, and often they, like here in Europe happens with those commodities, much better, than they've ever been; be it beer or wine, which taken to East-India, clearer and much more beautiful and clearer versed, than they would have been here.
Would however someone open a cask of beer or wine, and drink, don't do, like one would here, because the air outside would enter trough the gap, as well as the great heat would penetrate and cause decay, as the great heat and penetrating sun-warmth would change the taste and corrupt; but if one wants to start the beer or wine, and keep till the end, it's necessary, to first put the barrel in bouteilles of big carabaƒƒen, that is, glassware of 15 to 20 measures big, tap, and store therein, so the air cannot violate it.
Storage is done this way:
After one has rinsed out and drained well, one taps the beer or wine therein. Being full, close with a cork and smear with pitch so no air can enter there. If one wants to keep them for a long time, and one is concerned, one pours, before the bouteilles being corked, a little oil on the wine, en then one puts these glass casks in a cool place, till one wants to use them. 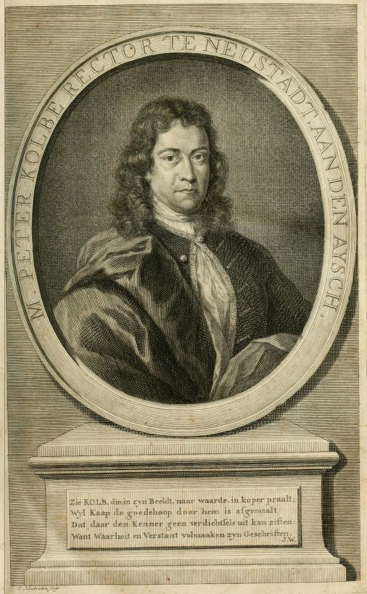