Pre-history of beer in England

In the year 1238 King Henry III granted trading-rights to Lübeck and despite hostilities from the already established wine merchants from Cologne an official ‘Kontor’ of the Hans was founded in 1266. One of the trading goods was the new hopped beer that came initially from Bremen (1), but hopped beer was soon made in other seaports as well. Outside London there were trading posts like in Ipswich, Yarmouth, Hull, York, Newcastle, Lynn and Boston.

Adventures
British traders organized under the name ‘Merchants adventurers’ and they also had their agreements and disputes with the Hans (2). The name ‘adventurers’ was rightly chosen, for it must have been turbulent times at the end of the middle ages. Trade began to increase, new cities were founded and population grew. Beer was a new trading good, for ales had been unsuited as a merchandise.

London around 1300 with Austin Friars and St. Katherine before the Docks.

Ale
London around 1380 had about 30.000 inhabitants and there were some 1000 ale breweries. Ale was hardly durable at all and therefore only little could be made of it at a time. In comparison; in the Low Countries hoppenbeer was made from around 1320 onwards. In England it would take many centuries to start using hops in beer. At first the new beer was accepted in the army and onboard ships where durability was of key importance.

Guilds
With the guilds it had been quite normal for someone to go and find a new master and start at a higher level of craftsmanship or start an own business. Over time and with a growing population breweries increased in scale and this would also cause brewers to look for other places to find employ. Detailed knowledge of the brewing process could spread naturally this way.

Beer versus ale
During the reign of king Henry VI there had been rumors beer was poisonous, it was better to stick to the old trusted ale. This was one of the first signs that the British themselves were starting to drink beer. Food safety was of great importance and ‘searchers’ were assigned to watch over the brewers. These brewers were mostly native ale brewers and only a few ‘Dutch’ brewers that made hopped beer. These ‘Dutch’ came from the continent ranging from the northern ‘German’ seaports to Flanders.

Elisabeth
During the reign of Queen Elisabeth beer gained increased acceptance next to ale (3). Queen Mary (Bloody Mary) had been of a different league and hop had then been ‘a protestant weed’. Protestant fugitives formed a new group of inhabitants in England and in London they would meet in the Austin Friars Church.

English beer
The large group of aliens in England were the first makers and drinkers of beer. Next to that the beer was exported and it had a good reputation in Amsterdam. On the continent beer brewing was done with more oats and ‘English beer’ had its own special character. At certain places on the continent one also started to make English beer (4).

Scum
In 1550 traditional ale brewers and brewers of hopped beer joined in the Brewers Company. The brewers of ale outnumbered the beer brewers and all kinds of discriminatory measures were passed (5). It is not hard to imagine it was not always very pleasant during their meetings and the word ‘scum’ must have originated somewhere in these times.

Evolution
One could become ‘Poorter of Amsterdam’ by donating a small amount of money but in London matters were not that easy and brewers would acquire citizenship only very slowly if at all. The rise of hopped beer could not be stopped and eventually beer brewing became a fully native affair in the course of the 17th century. Brewer William Ellis mentions the questionable reputation of the ‘vegetable’ hop that has been raised only ‘of late’ in 1737 (The London and Country Brewer (7).

Mystery
All kinds of remains still point to the ‘Dutch’ origin of English beer, including the word ‘beer’ itself. Underneath are some of them brought together including something truly remarkable; brewery ‘Roode Leeuw up Sinte Catarijn’ later became the well known Red Lion brewery on the very same spot at St. Kathrine Docks (a). Some of the mystery around Porter is still associated with this brewery.

[Sources to the history of trade with England, Scotland and Ireland

'master Breedberry, brewer in London in England at St. Katherine in the Roode Leeuw' (Red Lion)] 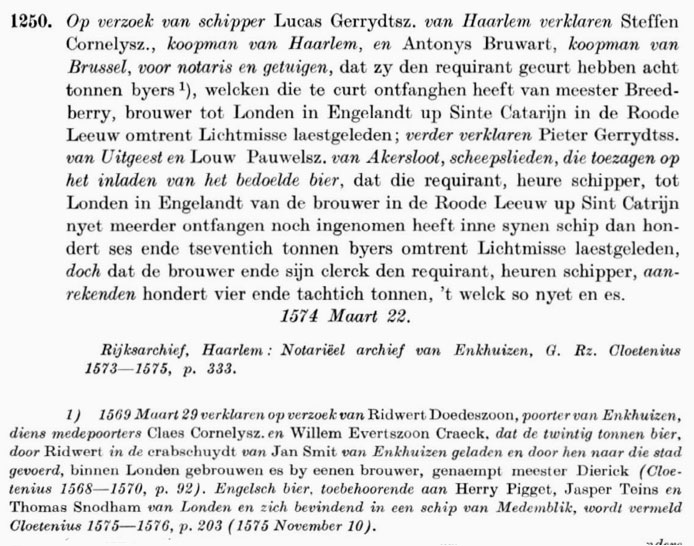 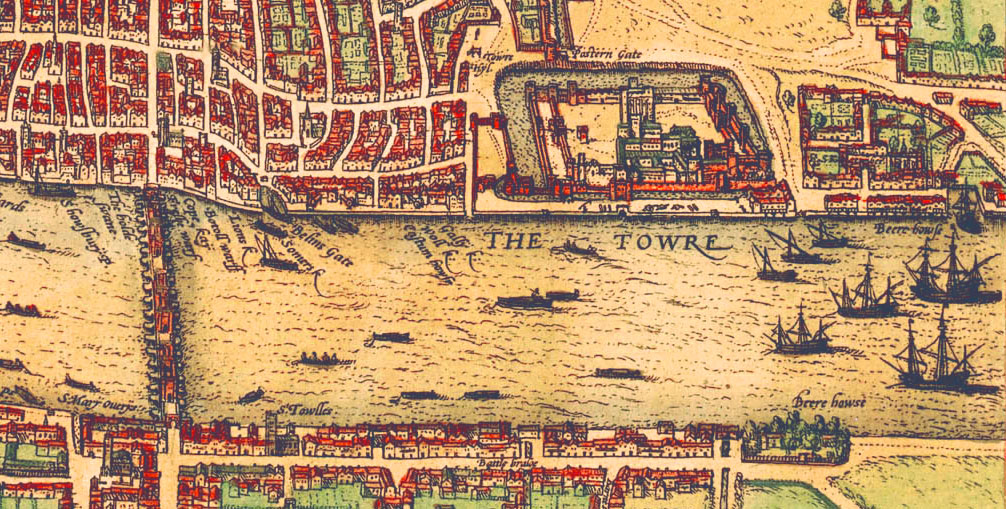 Beere howse at de Roode Leeuw up Sint Catrijn (right of The Towre).

The above Braun and Hoogenberg map (approx. 1560) shows a 'Beere howse' on the very spot the Roode Leeuw is mentioned in the official paper above. People are not named after their nationality but are 'poorter', like 'poorter to Enkhuizen'. The Red Lion would later become an important porter brewery with special huge vats for aging the beer.

[Of the known Hanseatic beer exporting cities only in the saxon Bremen, that was founded in Karoligian times, there would have been Grutbier (unhopped beer) at first. Latest second half of the 13th century, hopped beer would be brewed over there. Out of these times sources of Bremen beer as an international trading good originate, and this would be impossible without hops in the brewing process]

(2)
A Discourse of the Empire
London
Printed by F.L. for Charles Webb,
at the Boreshead in S. Pauls Church-yard
(Google eBoek)
1658

p.45
wherby the society of English Merchants adventurers were pronoun'd a Monopoly
p.46
Hansiatique Merchants shold be allowd to trade into England upon the same conditions and payments
provided that the English Merchants might have the same privileges 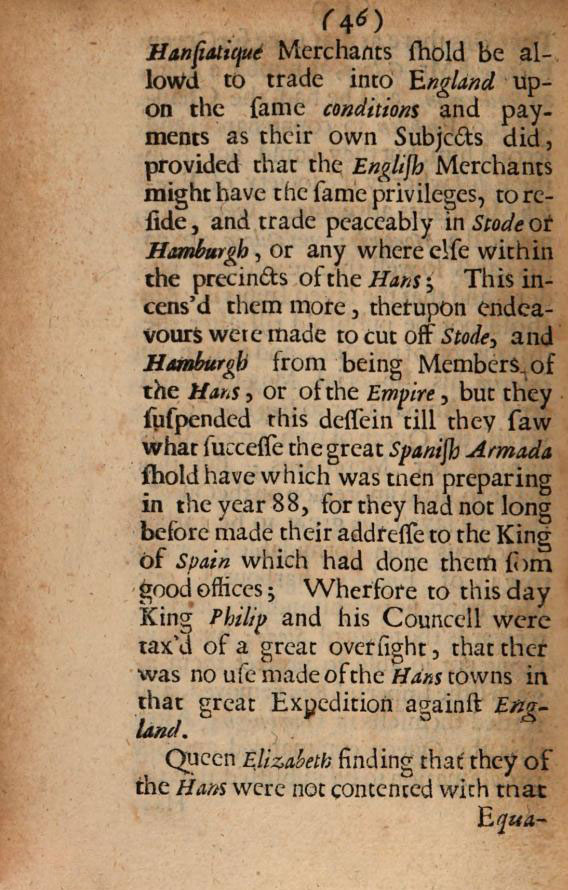 p.260
For nearly two centuries, hopped beer was regarded as an alien drink, or more precisely a Dutch drink, shunned by English drinkers, and its production was undertaken largely by aliens.

p.292
Conclusion
Dutch brewers brought the art of beer brewing to England in the early fifteenth century from Holland, but beer took a long time to gain popularity among English drinkers. Indeed, in the mid-sixteenth century, more than one-and-a-half centuries after its introduction in England, beer was still regarded as a Dutch drink 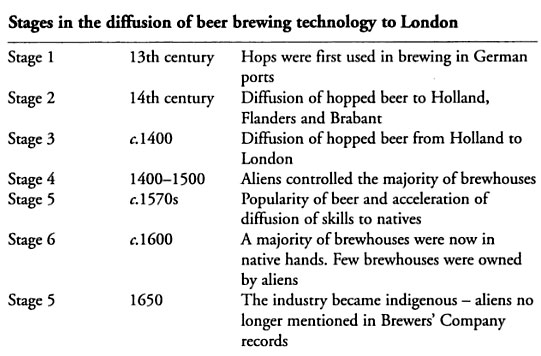 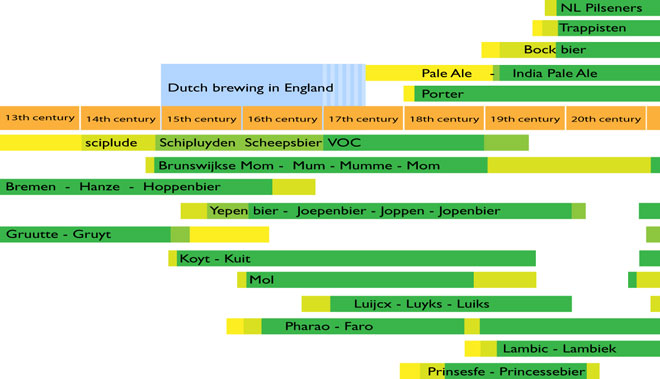 [Law and counsil of Middelburg grant Pieter Jans son, brewer, he may brew strong double beer, with the taste of English beer]

(5)
A survey of the cities of London and Westminster, borough of Southwark, and parts adjacent.
Being an improvement of Mr. Stow's, and other surveys, by adding whatever alterations have happened in the said cities, &c. to the present year.
(Google eBoek)
John Stow, John Mottley
Printed for T. Read,
1735 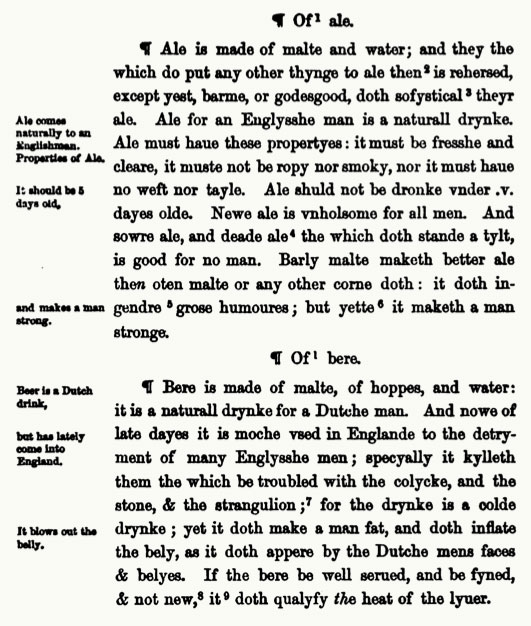 (6b)
Ale
ALE-VATED into the ALE-TITUDE:
A Learned Oration before a Civill Assembly of ALE-Drinkers,
Between Paddington and Hogsdon,
The 30. of February last, Anno Milli-mo Quillimo Trillimo,
By John Taylor.
London,
Printed in the yeare,
1651

p.63
Beere, is a Dutch Boorish Liquor, a thing not knowne in England, till of late dayes an Alien to our Nation, till such time as Hops and Heresies came amongst us, it is a fawsy intruder into this Land, and is sold by usurpation; for the houses that doe sell Beere onely, are nicknamed Ale-houses; marke beloved, an Ale-house is never called a Beere-house, but a Beere-house would have but small custome, if it did not falsly carry the name of an Ale-house; also it is common to say a Stand of Ale, it is not onely a Stand, but it will make a man understand, or stand under; but Beere is often called a Hogshead, which all rational men doe know is but a swinish expression.

This Vegetable has suffer'd its Degradation, and raised its Reputation the most of any other. It formerly being thought an unwholsome Ingredient, and till of late a great breeder of the Stone in the Bladder, but now that falacious Notion is obviated by Dr. Quincy and others, who have proved that Malt Drink much tictur'd by the Hop, is less prone to do that Mischief 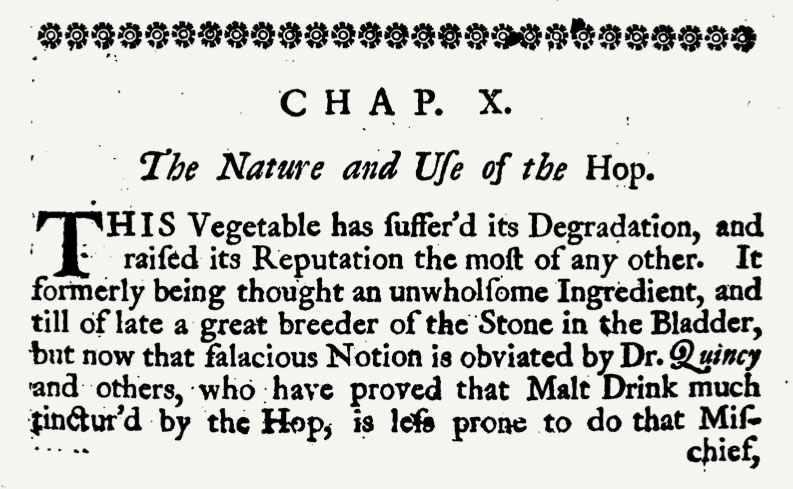 [Because all these amounts of beer would be shipped beyond the seas without the payment of subsidy the Court rules the beer confiscated.] 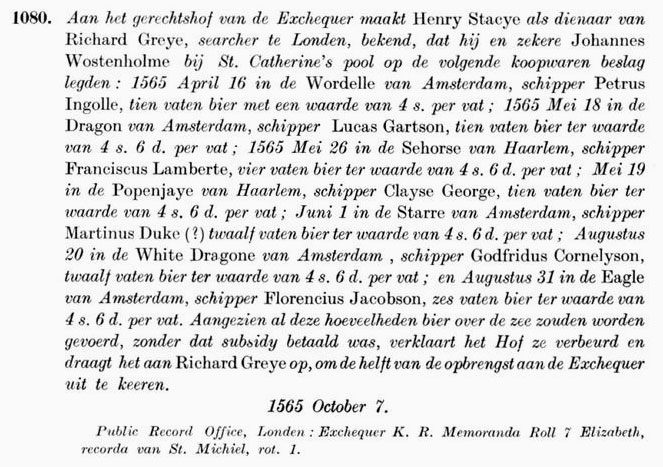 Between 1347 and 1351 about one third of world population dies. Well into the 17th century the disease returns regularly. 10 - 20% death-rate on a city population is normal.

During the outbreak of 1592-93, the Crown ordered the complete closure of all theatres in London. Shakespeare, then working with Lord Strange’s Men at the Rose theatre, would have been in the midst of a run of his Henry VI history plays (Bradbrook, 65), and likely financially devastated by the edict. 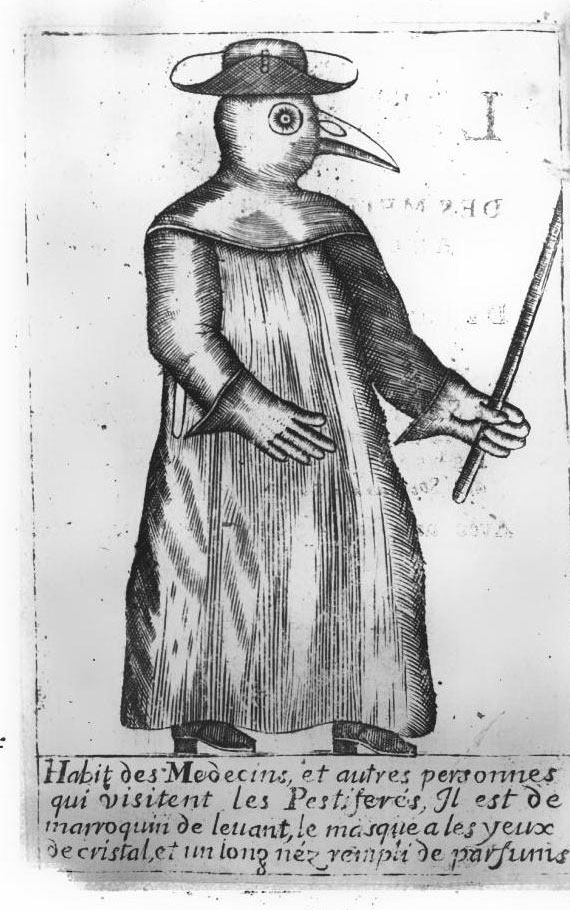 May say, the plague is banish'd by thy breath. 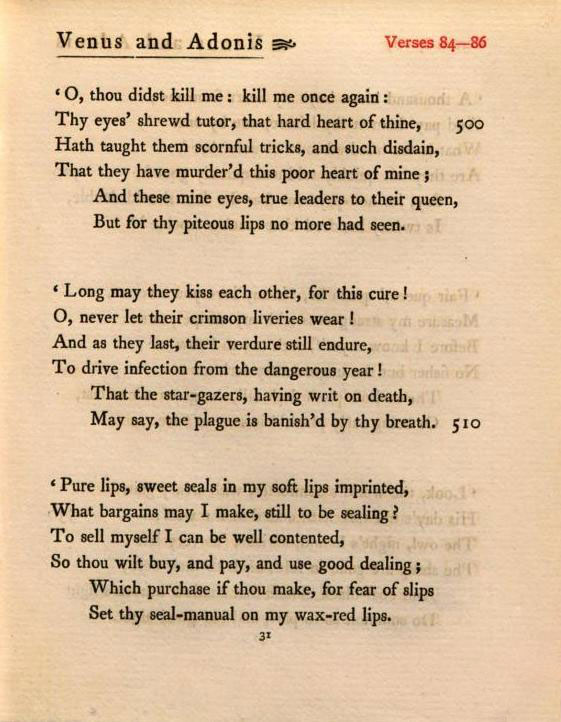 [in the breweries respective called the Hertshooren and the Siepe] 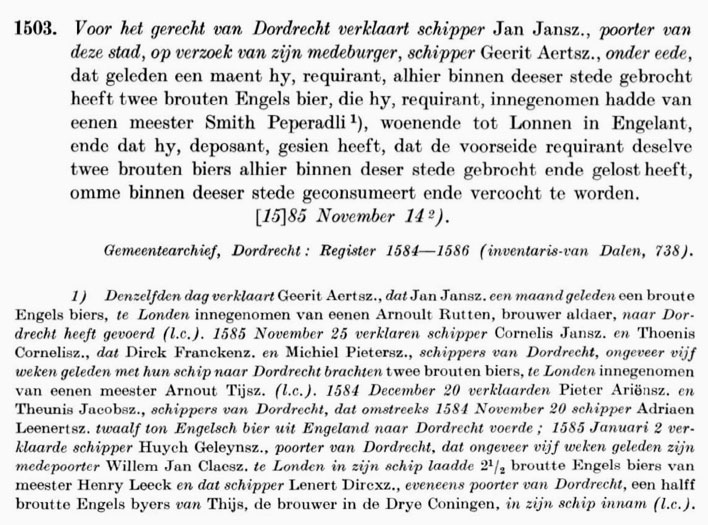 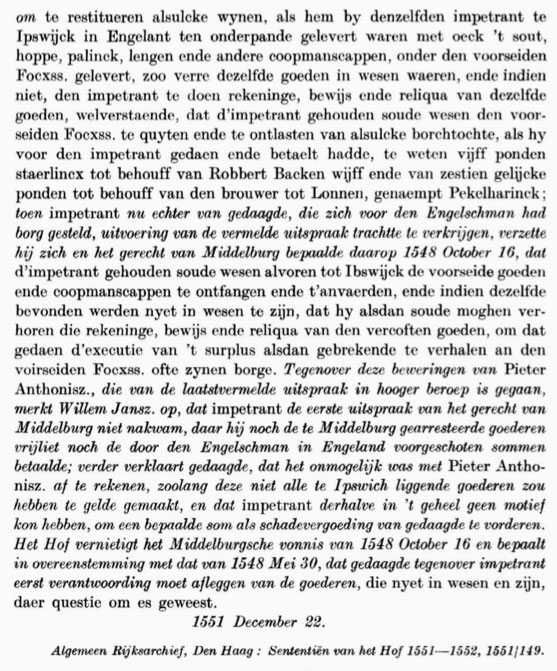 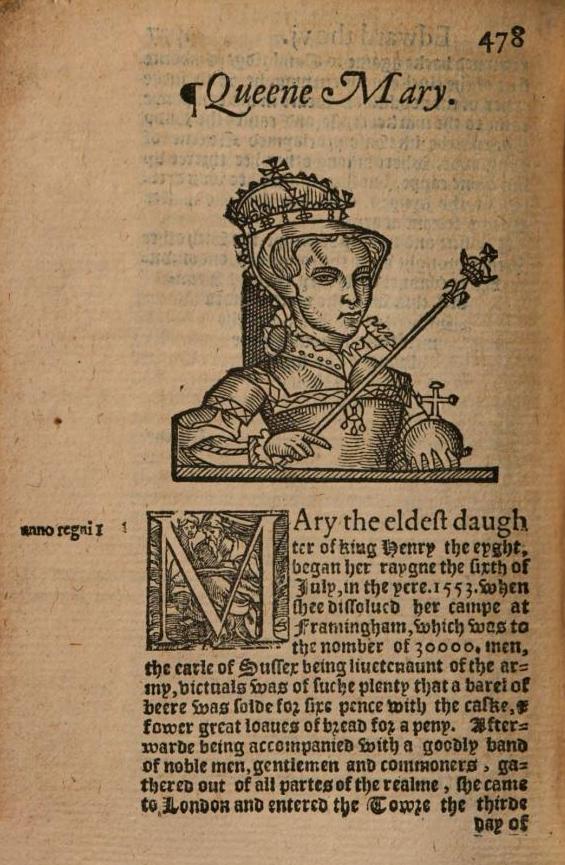 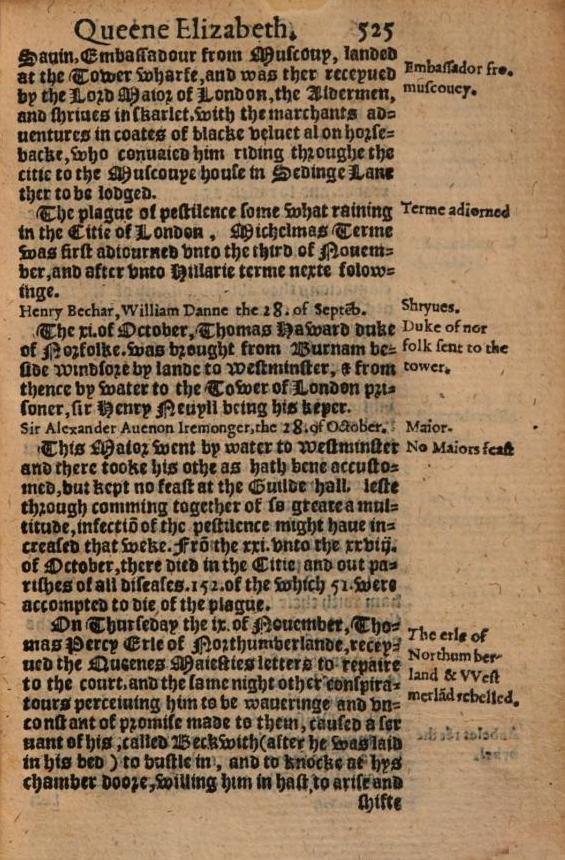 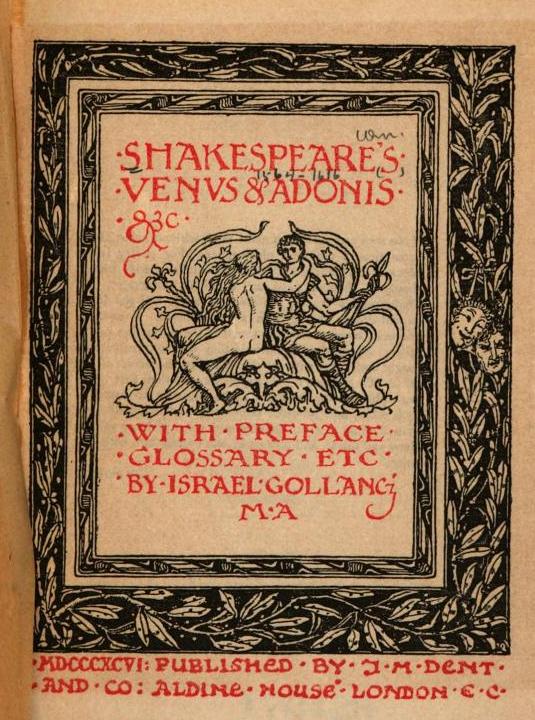 Hops out of Gouda (the Netherlands) 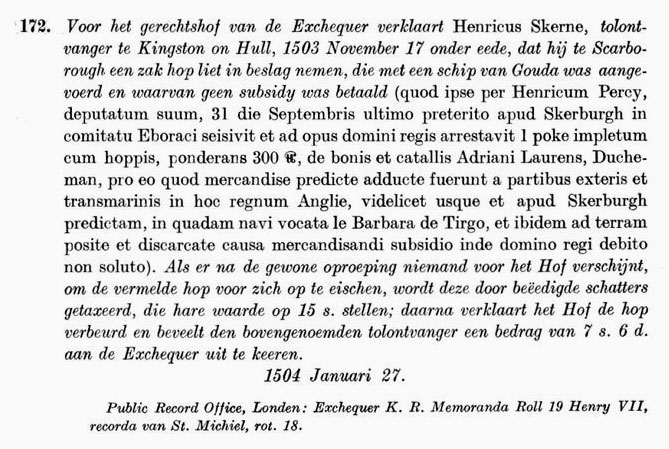