Dutch beer in the 19th century

A very large part of Dutch breweries disappeared in the 19th century, many crafts and skills were forgotten and the quality of beer became worse than ever before. There were many reasons for this and combined they had a devastating effect. In the article below and especially in the sources below I'll elaborate on these reasons. The bankruptcies and decline had already begun in the 17th century (1) and finally virtually only industrially manufactured beer would remain. The 'under-fermenting method' would be judged superior untill only recently.

Regents, troubles and revolution
A class of regents that had inherited enormous wealth had completely ruined the Netherlands socially and economically in the 18th century. They invested their money abroad and in luxurious living while their offspring could get handsomely paid jobs sometimes beginning at birth. The 4th English-Dutch war (1780-1784) meant the final blow for the Dutch East India Company as well as de Dutch Republic itself. They both staggered and then fell in 1795. After the French Revolution things started to change but then Dutch money was invested into Napoleons wars under French rule.

The final years of the Dutch Republic

Poverty
By the 19th century Dutch beer brewing had gotten into a severe crisis. Labour intensive and inefficient craft brewing ran into ever more problems. Beer was taxed high traditionally and a growing population became ever poorer and drank more of the new and cheap alternatives (2). Crafts disappeared and one became factory worker, office clerk, or even unemployed (3).

Cheap beer
Beer was necessarily attenuated to this market and became cheap above all (4). The growing population had to be fed and there were steep fluctuating grain prices. Attempts were made to brew 'beer' out of peas and mashed potato and alternatives to hops were tried. Hops were still cultivated in the Netherlands early 19th century and in 1795 one wrote: 'At Rhoden, Eelden but mostly Peyzen (in the north) there's much cultivation of hops' (5). In the Bommelerwaard and around Schijndel there was still the last remains of hop cultivation early 19th century while in Peize it was already gone. In 1860 very little beer was made in the few remaining Dutch breweries and consumption had also become lower compared to most surrounding countries (6).

Lost skills and trade
The reverse situation has existed from 14th through the 17th century, the golden ages of Dutch brewing. A small population of craftsmen and merchants had enough time and money to drink heavy hopped beer. Brewing in the 14th and 15th century was based on local ingredients and was supplemented by hops and grains from neighboring regions. Later what was called the 'mother of trades' meant cheap grains came from large estates in the Baltic, where they were cultivated by serfs (7). Grains and hops were traded and transported over fair distances in those times. Hop cultivation, around Brunswick for instance, was so massive that measures where in place for restrict it to one-third of total available surface area (8).

Biodiversity
Dutch beer had been brewed with lots of local oats in gruytbeer, hoppenbeer and koyt. Another beer-type was made largely with malted spelt. Dutch brewers generally used various types of grains in their beer but over time there was ever more use of barley and wheat. This had to do with a selection based on maximizing profit. Taste, quality or health aspects had never been part of this equation. A kind of special 'Dutch brewing oat' or 'Dutch brew' still existed in the 18th and 19th century and was exported by that time to England and can still be found in seed catalogues of the time (9). Ultimately this 'heirloom crop' finally disappeared.

Beer made with malted spelt in Dordrecht (1790)

Climate
The Little Ice Age very gradually came to an end and the relative cold had been beneficial for storing beer. Amsterdam and others cities had no cellars and the new warmth caused problems that were solved very slowly, at first with blocks of ice and later with refrigerators.
The chemist Erdmann saw the reason for the decline in the quality of beer in changes in the build environment of his days. The enlargement of cities, the cutting of trees, the demolition of fortifications and large buildings. Doctor Vrancken and chemist Lacambre wrote on the same subject and the noted change led to a alteration in the micro-climate and thus a changed process in brewing (10).

High taxes
Ages ago people had wondered about the extraordinary taxes levied on beer in the Netherlands. And not only on the beer itself, but also on vending, transport and source materials (11). It is safe to suppose that the rise of the Netherlands as a country and the associated costs of war were financed significantly by incomes from taxes on beer. Especially annoying was a 19th century tax on the volume of the brewing vessel that hindered any up-scaling and expansion. And even today those taxes are much higher than in surrounding counties. 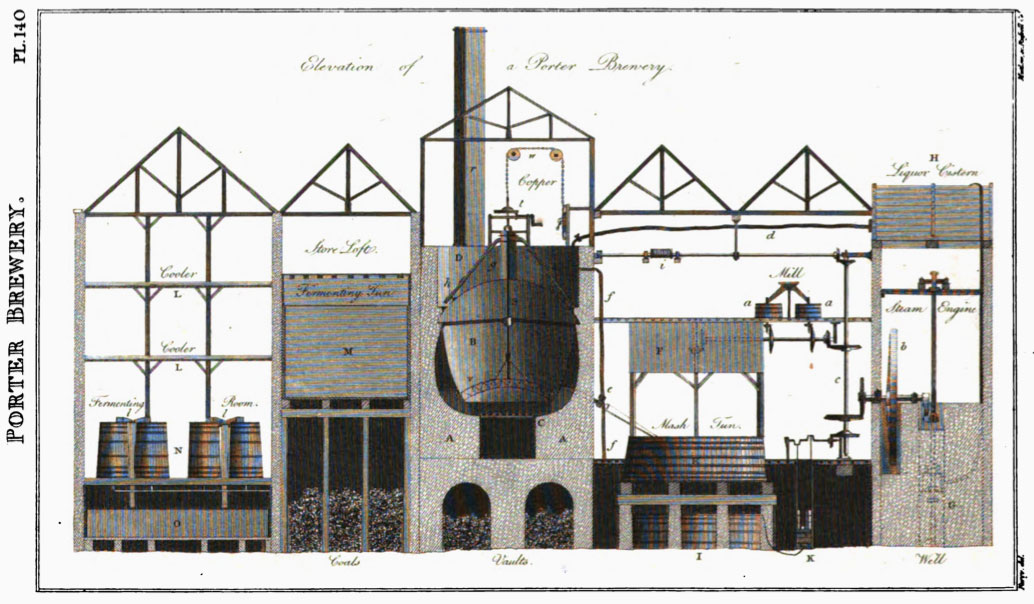 Industrialisation
The steam engine was invented 17th century but in the course of the 19th century foreign beer came around by steamships and trains. The world had gotten ever smaller and the Dutch situation was gradually exposed to an international perspective. In England factories producing beer on a industrial scale had been developed and elsewhere more efficient practices had evolved also (12).

Meager beers
Extract values of domestic as well as foreign beers are mentioned in various 19th century publications. 'There is sufficient alcohol in these beers' the Dutch chemist Gerrit Jan Mulder writes in 1857 and it is clear domestic beers were of a rather poor quality (13). We can't say all beers were meager and thin but this was certainly the perception of many and in the advertisement underneath one can see the huge price differences between foreign and domestic beer. Comparison was indeed unfavourable and people with some spending power bought the new foreign beers. 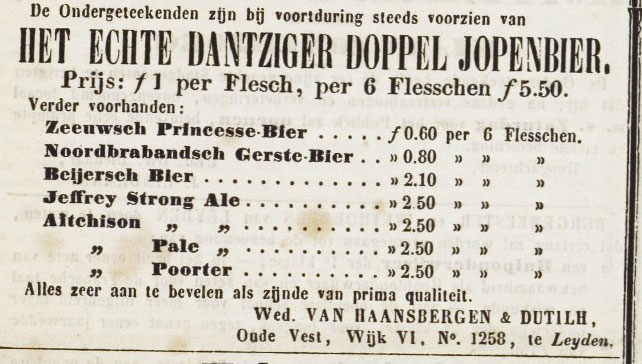 Factory workers
The new era meant an industrial and efficient workflow and mass production with the brewer as a factory worker. Craft breweries were closed or 'incorporated' which meant the same. Selling beer to millions of Dutch could be profitable for sure, and the owners of the factory were able to 'cater to the taste of the times, and brew Bavarian beer' (14).

Forgotten craft beer
We're used to things gradually improving but the remarkable Dutch craft beers had declined over the centuries and had gotten so bad they finally faded away. Two world wars in the 20th century made sure any remembrance also disappeared.

'Today the Breweries in Groningen are not as good and big as they were before; their trade has been diverted by the troubles.' 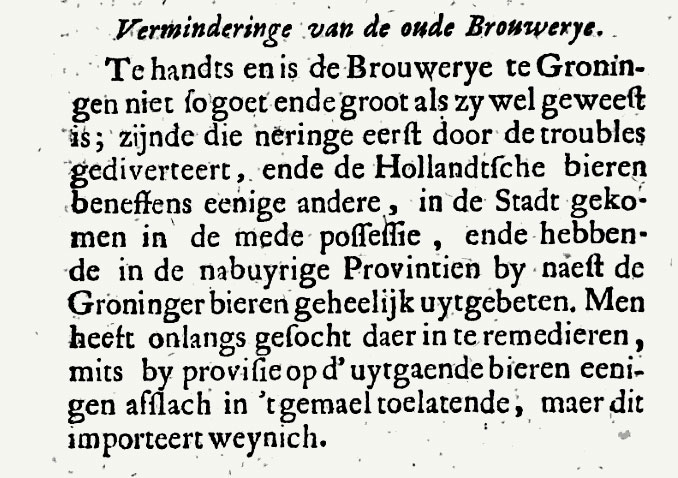 (1b)
The English and Dutch affairs
London,
Printed by Thomas Mabb,
for Edward Thomas,
1664 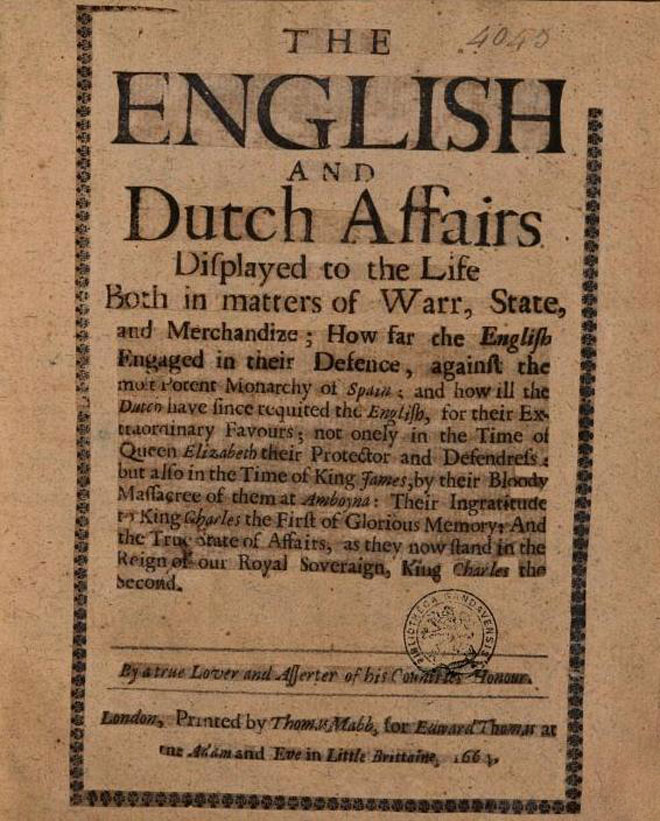 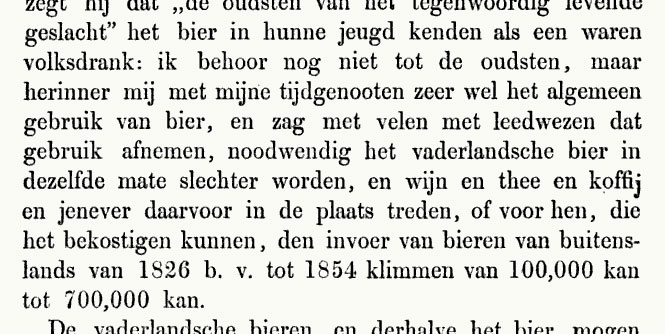 'Especially on the last law (of 1822) about brewing beer the whole decay of brewing in this country was blamed, it hindered the industry and prevented it from keeping up with foreign brewing.' 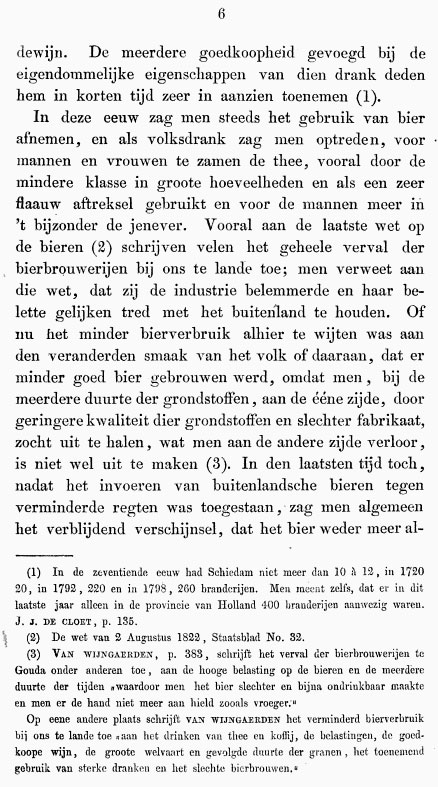 (2c)
Population growth in the Netherlands 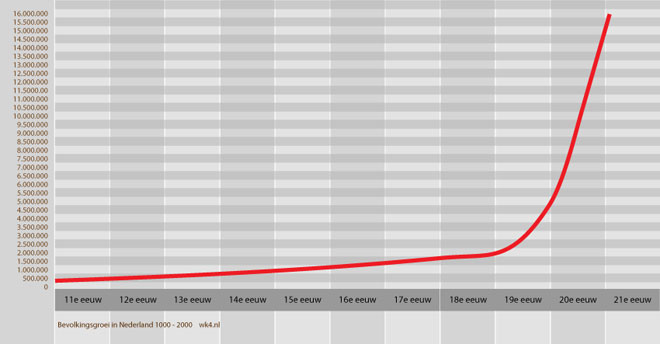 Population growth: from 2 to 5 million in the 19th century. 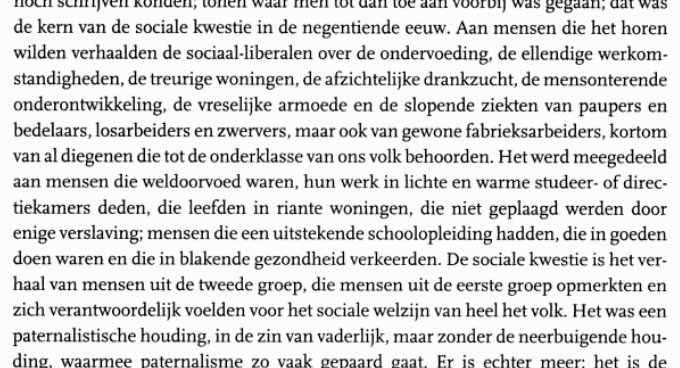 'The brewer KANTER states, that, because the taxes on coal have been raised substantially, and those on Beer keep on increasing by local policy, he cannot decrease his Faro and Barley beers any more' 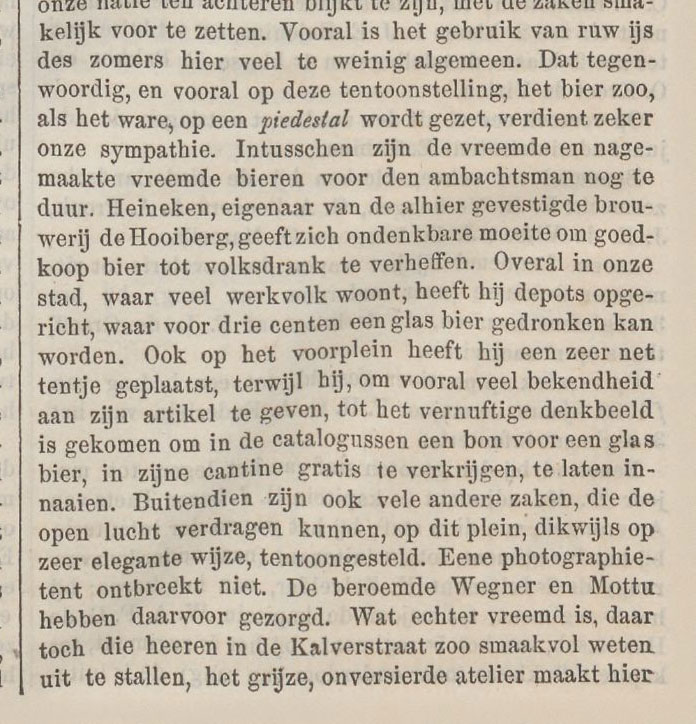 'Roden, Eelde, but Peize especially, there is much hop cultivation' 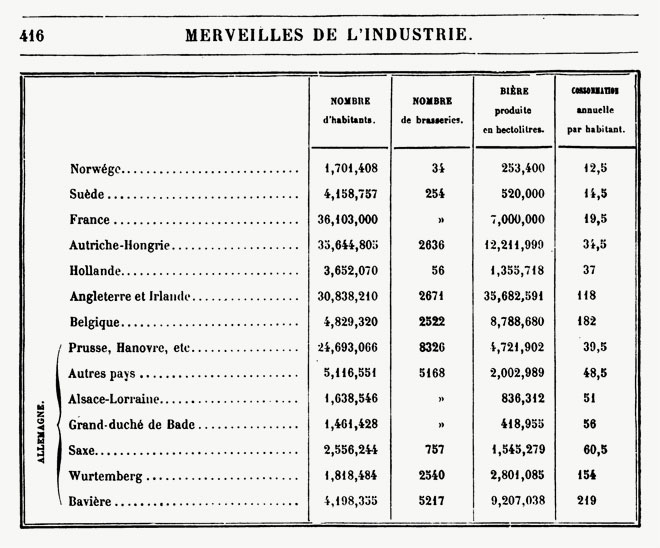 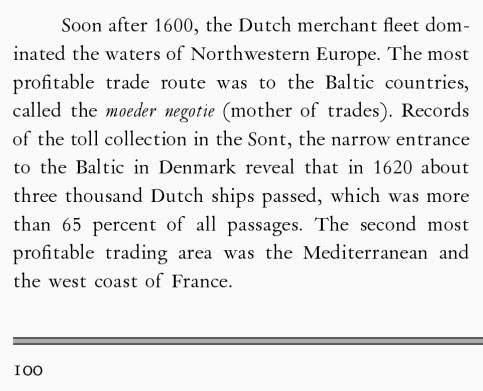 p.457
A CATALOGUE of AGRICULTURAL SEEDS 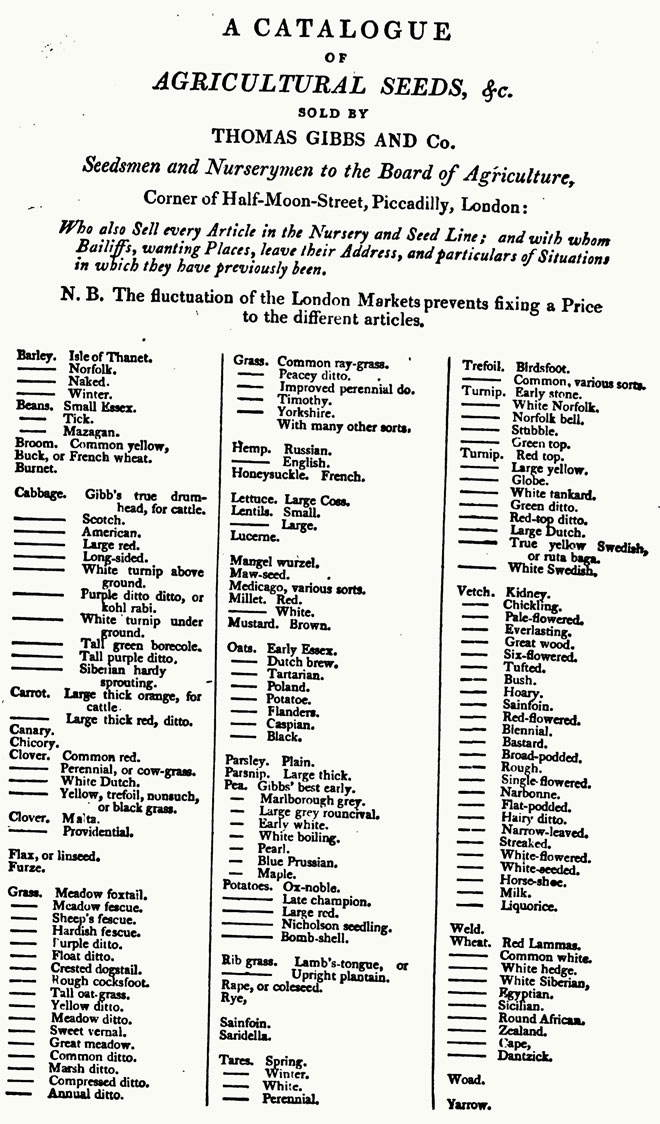 [So the local influence has changed completely, the wind has changed] 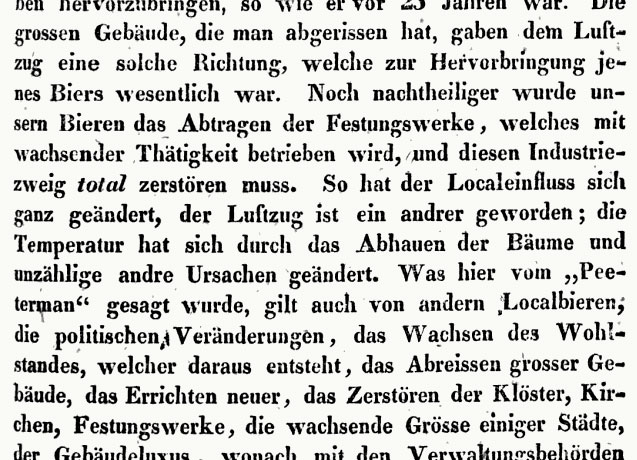 [Answer to question 81: Because it is well known, that in brewing beer, following the same method, some beers can be brewed anywhere and some just around certain places, soo the society asks: an overview of the chemical theory of brewing in general and that of Dutch beers in particular.]

[Local influences on the quality of beer] 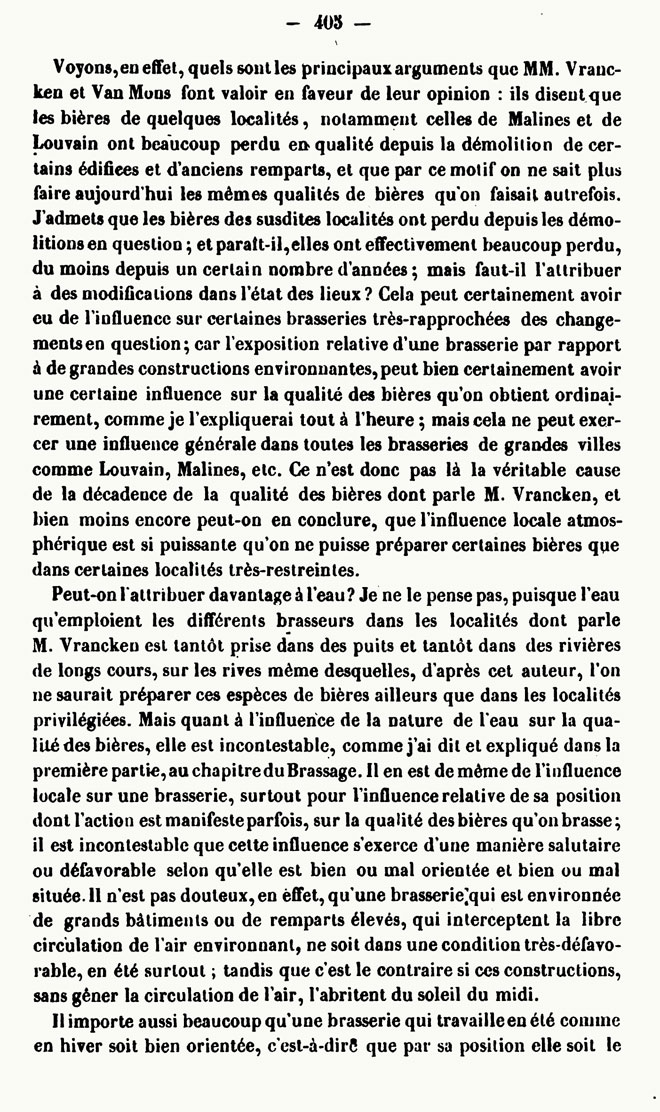 (11)
The present state of the United Provinces of the Low-Countries
as to the government, laws, forces, riches, manners, customes, revenue, and territory, of the Dutch.
In three books (Google eBoek)
Volume 2
William Aglionby
Printed for J. Starkey,
1671

p.141 -146
CHAP. XX
Of the Tributes and Imposts; of how many sorts they are; and of the manner of levying them in Holland.

2. The Exicise upon Beer, which all the Citizens pay without distinction, comes to twenty pence a Barrel; except small Beer, which is not worth above half a crown a Barrel; payes nothing.
3. Another Excise upon Beer, paid by the Brewers, which comes to twelve pence a Barrel.
4. The Victuallers, and those that sell Beer, pay other twenty pence for every Barrel.
6. The Impost upon Beer, five pence.
16. The impost upon all Corn that is ground in the mills in Holland, which every body payes without exception, comes to five pound, one crown, and twelve pence for every quarter of Wheat; to half as much for the quarter of Rye; to five and thirty schillings for Barley and Oates. 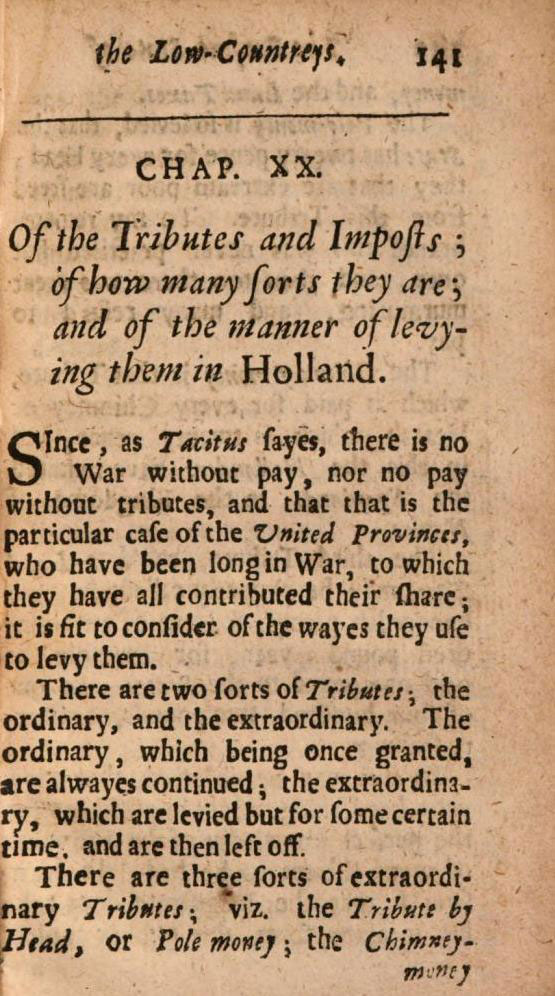 'There is sufficient alcohol in these beers' 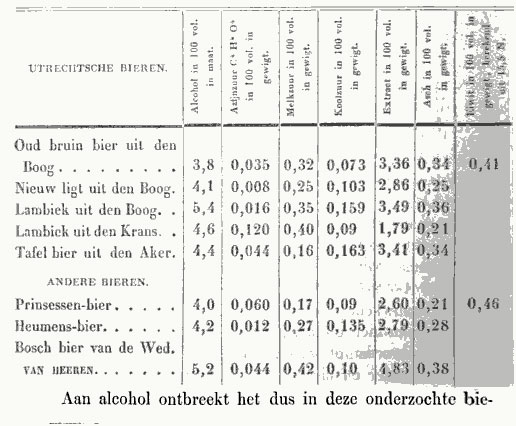 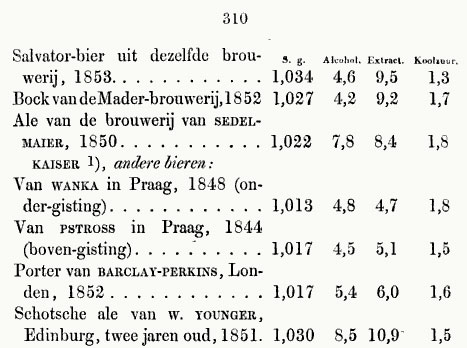 'and by catering to the taste of the times, and brew Bavarian beer, he has given the Dutch the opportunity to buy a perfect peoples drink, brewed domestically.' 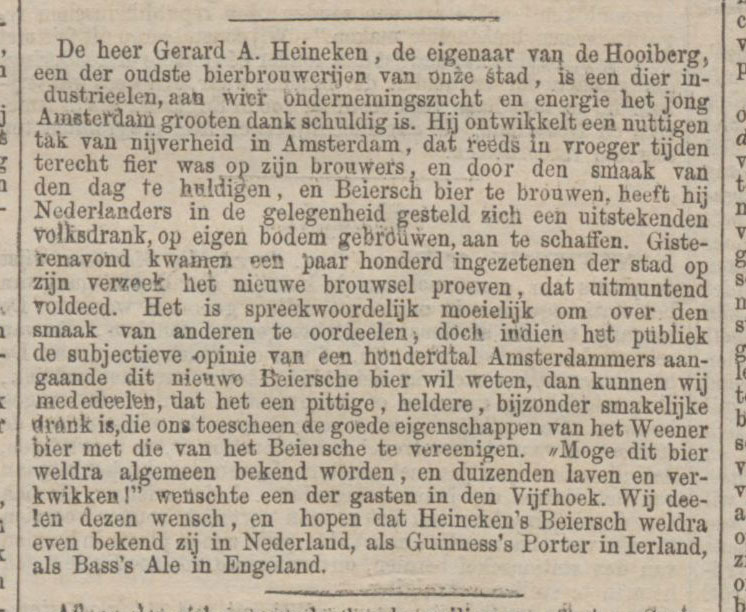