Further evidence on the essence of gruit

Through the ages people have wondered about the nature of gruit. Many, often bizarre theories have formed and were also rejected. Most often gruit was interpreted as grain or malt, but people just couldn’t figure out how.
Today gruit is often seen as a collection of herbs but this was never properly demonstrated and hinders a true understanding of the matter. Sources simply continue to point to grain and malt. What about the herbs, one might ask: Well, they were certainly there in some places, but they were just herbs and were also called herbs. The ‘herb theory’ remained obstinate despite the lack of proof and the first one to object was dutchman Hans Ebbing (1).
The oldest Latin sources present gruit in terms like ‘negotium generale fermentate cervisie’, meaning something as ‘main stuff (for) fermented graindrink’. Later there are more informative terms as ‘polenta’, ‘pigmentum’ en ‘frumentum vulgariter dicitur Gruyt’. All these have in common that they have nothing to do with herbs. Especially polenta and frumentum point to grain and in later sources indications like that continue constantly.
My 2016 article concluded gruit must have been boiled down wort and connected this to graut and grout from respectively Scandinavia and England. This theory is endorsed by many more clues I will present below.

Latin
Below some of the present evidence on the nature of gruit from Latin sources.
Fermentum (or fermentatae (2)): added concentrated wort will result in an extra or elongated fermentation and a thicker, stronger, more durable beer and could have been used at almost any stage of brewing. Concentrated wort explains the Latin ‘soppa fermenti’ (3), and the vulgar ‘gruetsoppe’ (4). Polenta (5) was translated by de Lobel (Latin: Lobelius) as Naerbeer or Graut, being concentrated wort. Levarentur (6) speaks of levitation or the rising of beer during fermentation.
One of the clearest early (1074) indications about the nature of gruit is this one: frumentum vulgariter dicitur Gruyt. Translated: the grain ordinarily called gruit (7). Conservabimus (8) is probably about conservation. Latin pigmentum (9) could be caramelization or a similar reaction when making concentrated wort. When boiling down wort the liquid will become ever darker and will eventually be a very dark brown sticky and durable substance.
Some Latin glossaries make the connection between Grutum and English grout, German Grut and other variations in spelling, but there is not yet any mention of herbs in connection with gruit in early sources. 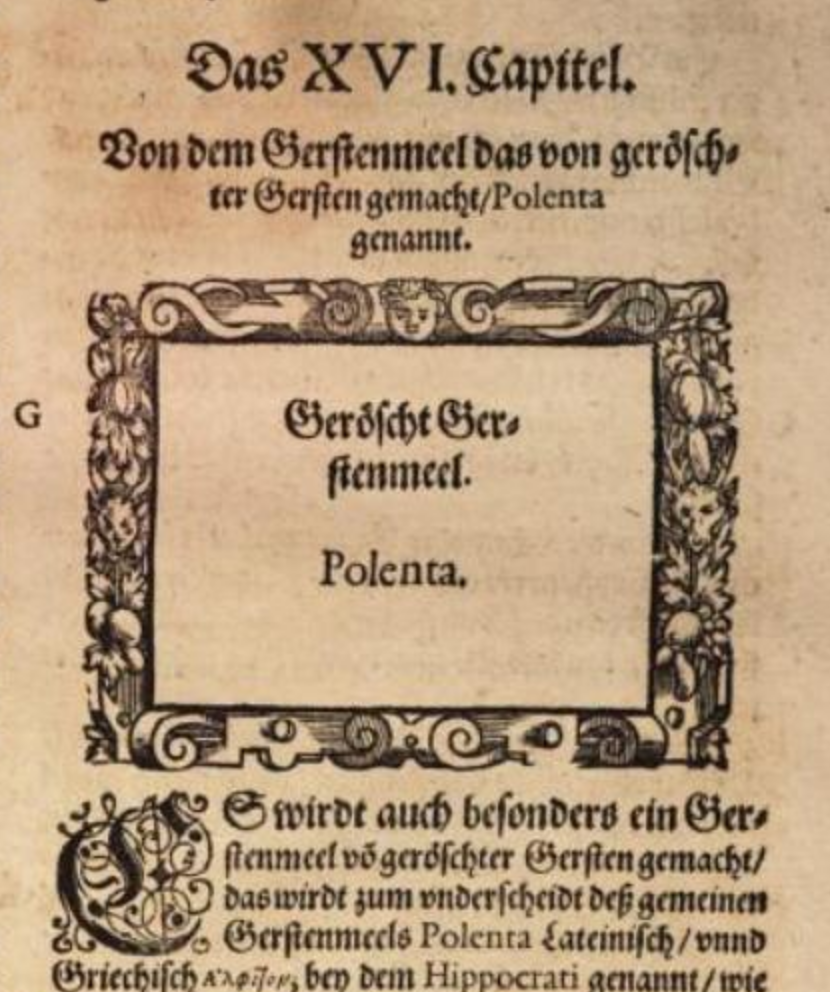 Polenta in the Neuw Kreuterbuch, 1588

Coroners
Two 13th century British coroners (10-11) were confronted with people that incidentally fell into a large vat of boiling gruit and did not survive. They are reports in Latin by government officials and speak of boiling gruit (grutum bulliente en grut’bullientis) and form the strongest possible evidence for our theory on the essence of gruit. These two sources are consistent with several others: for instance the gruit kettle that was also present in gruithouses on the continent. The contents of the kettle could only have been boiling wort, for boiling the various herbs that were present in continental gruithouses makes no sense at all. The kettle being large was for added efficiency, the durable grout made in the kettle could have been for their own use, or be distributed to a number of brewers with much smaller kettles. They could have made a stronger and better beer for their clientele in such a way.

Misunderstandings
There are many misunderstandings surrounding the history of beer and a related one is the notion that, first there was gruitbeer and later it was replaced by hopped beer. Solid proof for brewing with hops long before and around the year 1000 needs to be neglected for that. My alternative theory is population growth and other circumstances in the high middle ages must have made hops very scarse, making people look for alternatives. Hopped beer export started in the 13th century from Bremen and Hamburg seaports with gruitbeer being made in Cologne simultaneously. More about the pre-history of hopped beer in my article about that.

Recipes
The connection between ‘grutum’, ‘polenta’, ‘gruit’ and ‘grout’ is made by many. Contemporary researchers sometimes focus on regional differences, but gruit was essentially the same everywhere. It was indispensable to make good beer in the absence of hops and often with grains like oats and spelt.
Lobelius (13), a scientist and intellectual, mentions his ancient greek colleague Dioscorides as an early source of Polenta being a porridge made of concentrated wort. He uses it to make beer (Enghelsch bier Ael geheete, translated: English beer called Ale) and to make various medicines. He further indicates it was eaten with bread in Delft (Holland).
Historie of the World, one of the largest single works to have survived from the Roman Empire was translated into English by Philemon Holland (14) and describes the making of ‘The ordinarie drie grout or meale also Polenta’ in detail.
Charles du Fresne (15) describes grutum as a ‘boullie qui se saifoit avec de l’eau & toute sorte de farine’, translated: porridge made with water and all kinds of flour. Various editions of his ‘Glossarium’ (16) make the connection between grutum and Granamelum, Anglis Grout, à Saxonico Grut, Far, condimentum cerevisiae.
There are more recipes for making grout (17) ‘To make grout’ and many later British sources and recipes that indicate grout is essentially concentrated wort. One of them is of particular interest and describes ‘The method of brewing beer, before the use of hops’ and ‘It was neccessary first of all to make the grout’ (18).
The dictionary Anglo-Latinus by the Camden Society (19) features a story on ‘Growte for ale’ and links it to medieval Latin grutum or grudum, old French gru or grust and Anglo-Saxon grut.
Van de Kieft (20) mentioned one of the oldest sources of gruit, the 11th century ‘polenta cervisie que vulgo maire’ and explained it as ‘une sorte de bouillie’, translated: a kind of porridge.

Workflows
Although tax laws varied in different places, the basic nature of gruit remained the same everywhere. Wort was concentrated and could be mixed in all kinds of workflows and with all kinds of substances, like wort, herbs and yeast. Its compact, durable and sticky nature must have made it easy and logical to do so. There is relatively large quantities of unhopped beers like British Godeale exported to the continent and beer sent down the river Rhine from Duisburg (Duusburs beer) as well as very small batches of local ale and gruitbeer with herbs, durable for only a few days.
Concentrated wort is durable and fits a society that doesn‘t waste any food and is very usefull for a brewer. It can be employed in many stages of brewing, it is consistent and logical; it was basically the same substance everywhere. There is a plain recipe by Lobelius (28): Graut wordt aldus ghemaekt, translated: ‘Graut is made like this’, and there is more to follow (29-30).
Many Latin dictionaries make the connection between the Latin Grutum and British (Anglis) Grout, German Grut and other variants. Concentrated wort is consistent with: ‘a porridge called graut, -a favorite dish of the Northmen-, for the cooking of which an unusually large kettle was provided’(31).

Yeast
Although descriptions of a practical workflow of making gruit are scarce, there is a few in which it is combined with fermentation or adding yeast (32, 33). Boiling yeast could result in added yeast nutrients in gruit. Gruit made in this way places the Latin term ‘fermentum’ in a broader perspective. 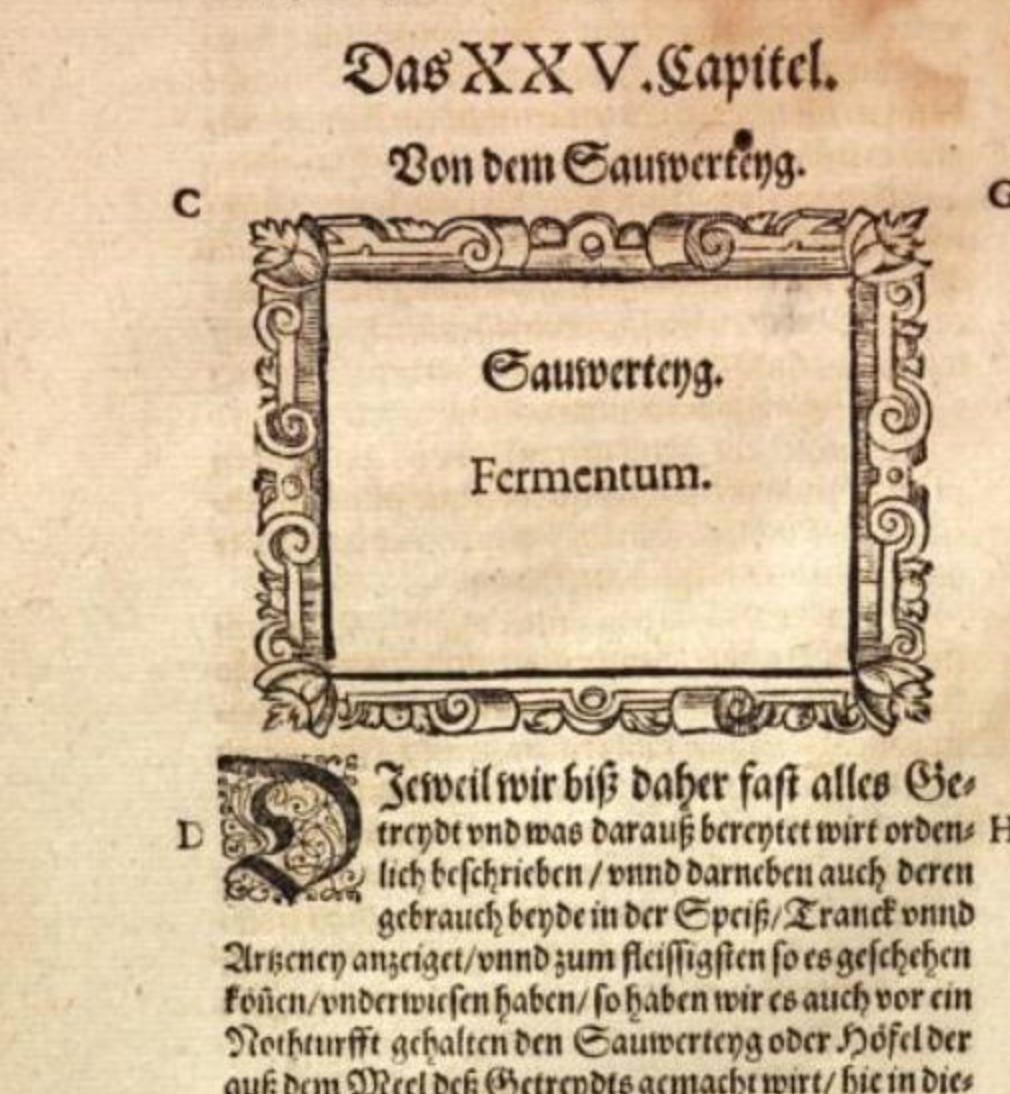 Fermentum in the Neuw Kreuterbuch, 1588

Herbs
Much of the above evidence rules out gruit as simply a mixture of herbs, but some knowledge of the brewing process could also be helpful to understand why herbs were not what was ‘made’ while manufacturing gruit. Hops have to be boiled for some time to be able to preserve beer, add their bitterness and balance the original sweetness. Most other herbs however will lead to a very bad tasting beer when presented to a brewer boiled for a fair amount of time. This could be compared to making tea by boiling the tealeaves. There are various methods to impart delicate herb flavors to beer, but that is outside the scope of this article. It is important to understand that herbs were not likely to have been what was boiling in the kettle mentioned earlier.
Gruit is distinguished from herbs in both Arnhem and Cologne; Arnhem (32): ‘verboden gruit ofte cruyt elders te halen’. Cologne (33): ‘einig grudt noch kraudt im bier zu thun’.
There is more instances mentioning the two together; ‘grudt noch kraudt’, also in Cologne, but this time much later in 1593 (34). There is also hops in gruit; hoppe ind gruiss’ (25) and hops are mentioned in the Deventer gruithuis; humuli ad domus fermenti’ (35).
In al these cases one could argue herbs (and hops) were part of gruit, but they were not the same and certainly not the essence. My personal idea is to be clear about it; gruit is gruit and herbs are herbs. Logical and in accordance with the facts.

Confusion
Mid 19th century a edition of ‘Mittelniederdeutsches Handwörterbuch’ appears with this line of text: ‘des men an den crude hadde, dat to der grut horde’. This sentence is from a 1444 charter that reads: ‘umme dure tidt willen des men an den ernde hadde, dat to der grut horde’.
The dictionary uses the false quote to prove wild rosemary or ‘Porst’ was gruit. But not the herbs belonged to gruit, originally the (grain)harvest belonged to it.
From this date the theory spreads despite a try to correct the fault; ‘Die Gleichsetzung von gruit und Porst ist unrichtig’, states the Bergischen history-magazine in 1874 (36). Anyway, the 1876 edition of the mentioned dictionary repeats the same mistake (37).
Later historians compared a gruithuis to a regular brewery and made a simple judgement; the obvious difference is in the herbs, so herbs must be gruit.

Caldarium
Aloys Schulte wrote a valuable essay on gruit and herbs, but in the end he returned to the ‘grossen Kessel (caldarium)’; the big gruit kettle. Schulte concludes: ‘Jedenfalls war die Bereitung der Grut an eine grössere Anlage gebunden’, translated: ‘anyway the preparation of gruit was tied to larger equipment’ (38).
The Cameraars-accounting from 1347 Deventer mentions costs ‘ad magnum caldarium in domo fermenti’, for the large warmwater facility of the gruithuis. In Roman times a caldarium was part of a bathhouse. As we saw previously in 13th century England they were so big one could fall into it accidentally.

Conclusion
Gruit (Latin: grutum, grute) was prepared in this big cettle or caldarium and it was very likely to have contained wort boilling down. It was thus concentrated, made compact, durable and very useful. On the side many other activities and workflows could have taken place. These were likely to have been different through time and region. In my theory gruit was essentially the same everywhere from England to Flanders, parts of the Netherlands, parts of Germany along the present Dutch border and Danmark; a large area where hops have been scarce for many generations and centuries.

My online collection of sources on gruit has been ever expanding and contains many new items. With that and this new (2019) article I hope to have shed some meaningful light on the subject.

All sources backing this article can be found in chronological order: History - Sources about beer - Gruit - Grutt - Gruijt - Grout - Graut

Graut is made like this.
One takes 6 or 8 pounds of crushed malt, boiling hot water 12 or 15 pounds, which mixed together and well stirred 6 times in a day, and with blanckets and straw very well covered soo long together in a clean barrel shall soak that it becomes thick as syrup. After that it shall be fired and boiled, and stirred very well to keep it from burning, till it is thick as porridge.