Well documented history of hopped beer starts with the Hanseatic beer trade that emerged from the Saxon port-city of Bremen in the 13th century. But how did this beer-trade with hopped beer come about? To shed some light on this we need to delve into a piece of history with some quite exotic aspects. We will start at the beginning of the medieval warm period with a tiny population. In the year 800 Charlemagne was crowned by the Pope in Rome with an estimated 30.000 maximum total population (1). This in shrill contrast with a population of around a million during the height of the Roman empire. All over Europe human population had decreased in size to very low levels after the fall of the Roman Empire. But in the minds of Charlemagne and later emperors the Roman Empire hadn't fallen at all; they were the legitimate rulers of the then present Roman Empire.

Nobility, Clergy & Serfs
Charlemagnes empire is covered with dense forests and its few inhabitants are divided into a small nobility and clergy with intellectuals like Alcuin of York and Waldo of Reichenau. While these men travelled all over Europe, common folks where tied to the land as serfs, doing the labour and pay a type of tax in kind called tithes. Labour is organized in large estates (villae dominicae) and one of these is overseen by Adalard of Corbie (Charlemagne was his cousin). The reason we find so little sources is because there is only a small population largely made up of illiterate people and this story is about popular culture. Below my translation from Latin (2) of a few lines Adalard wrote about malt, hops and beer:

‘Of the malt prepared in the various operational centers, the tithe must be taken in favor of the doorkeeper, after the manufacture, before the product is taken to the monastery.
The hops, on the contrary, will only be taxed after transport to the monastery and each month the porter will be given the tithe of each cargo. If this supply of malt or hops is not sufficient for him to procure the necessary; it is only stipulated that the brewers of the monastery will brew all the beers he will need, as the bakers will bake all his bread.’ 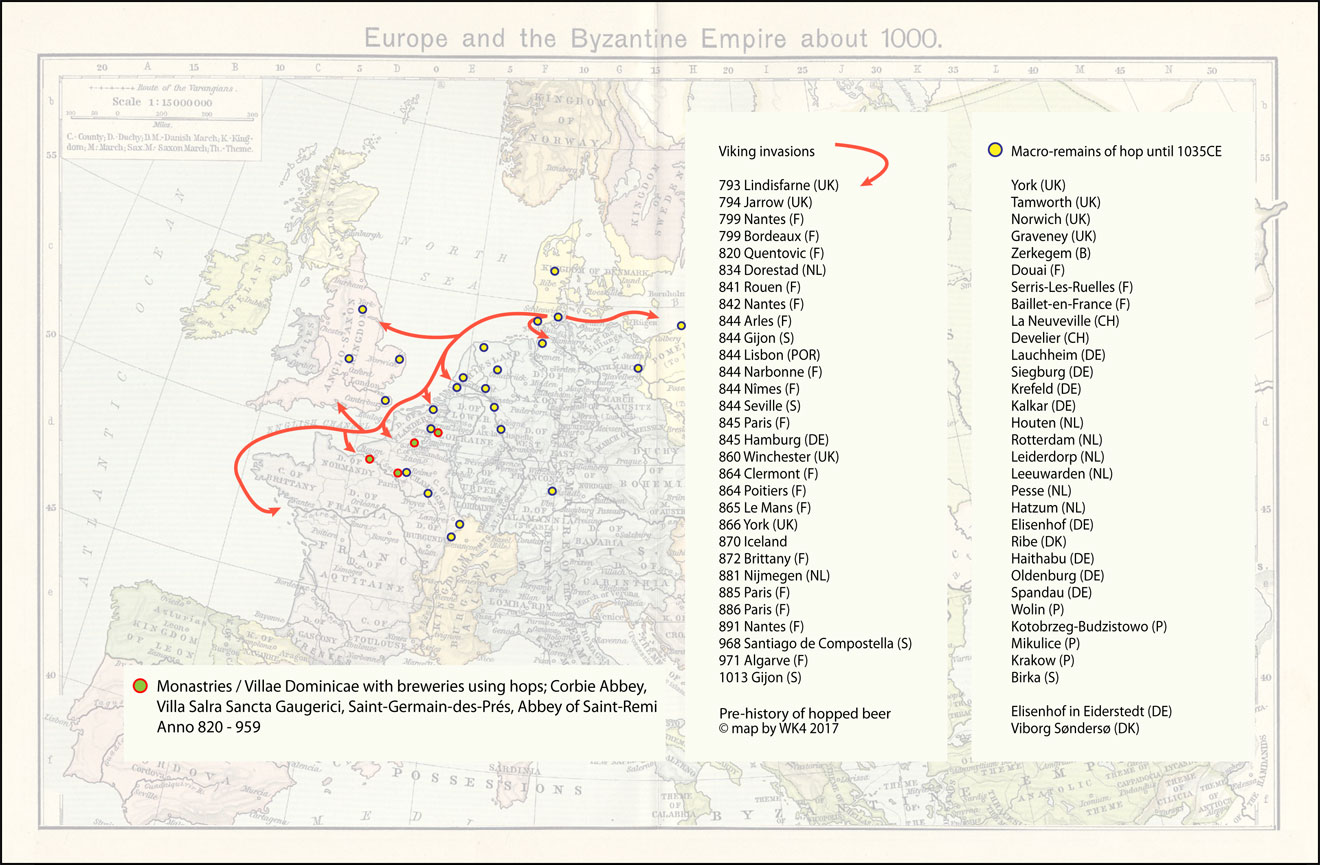 Pagans & Christians
The first Viking raids had begun some decades earlier between 790 and 800 on the coasts of western France. Those raids were preceded (and provoked) by the Saxon Wars of Charlemagne who first entered Saxony in 772 up until 804, when the last rebellion was crushed. Another kind of battle was fought by missionaries, mainly Anglo-Saxons from England, to promote christianity.
The pagan Saxons, Frisians and Danes fought a losing battle but they were allowed to hang on to ancient customs. The Lex Saxonum stems from this time and much later, around 1220 - 30 there is the Sachsenspiegel. This ‘Mirror of the Saxons’ mirrors the old laws of which was said: ‘I did not invent these laws myself, but they stem from our elders and our good forefathers’. In the Sachsenspiegel we find a picture of a man with an ax cutting shoots of hops coming over the fence from his neighbor with the text about the old right to do so next to it (3).

Archaeobotany
Karl-Ernst Behre wrote about the results of his archaeobotanical work in 'Ernährung und Umwelt der wikingerzeitlichen Siedlung Haithabu' (1983): ‘Nutlets of hop were also found in large numbers and are regarded as waste products from brewing’. Haithabu was an important Viking settlement near Sleswig where the Danevirke defenceline was build in 808. In his later work, The history of beer additives in Europe (1998) he states: ‘One point with regard to the sites themselves should be emphasized here: beer production in earlier times was not dominated by monasteries as it is often thought today. Most records of hops in the early and later Middle Ages do not come from monasteries. Some of the early northern finds date back to before Christianization in the respective region’. His point of view is repeated and endorsed by a publication called 'Viking Age garden plants from southern Scandinavia' (2012): ‘The finds of hop from Viking Age sites show that hop as a beer additive was probably popular earlier than previously assumed’.

Colliding cultures
The reason monasteries were associated with brewing is simple; monks were about the only ones who could and did write. But if we look at our first example about Adalard and his hopped beer it is quite clear that the ingredients for the beer in his monastery were brought to him by his subjects who kept the rest (nine parts out of ten) and made their own beer with it.
Although written sources are scarce, they are certainly there: another one is from villa Salra Sancta Gaugerici mansum dom(inicatum) dating back to mid 10th century. Brewing (canbas) seems to have been done with spelt and oats, as well as humilonem or hops (4).
In 1050 the Haithabu Viking settlement was destroyed, probably by a coalition of their immediate neighbors from Bremen and Hamburg who later started brewing with hops with professional brewers, well organized and on an increasing scale. Vikings, on the other hand, began to stay in the lower Seine valley after their invasions and ultimately founded Normandia in 911. We know a lot about wars and invasions, but on another level a mixing of cultures must have taken place. In between Northern France and the Nordics the knowledge of brewing with hops is likely to have been narrated by common people who did the actual work, not necessarily by monks or scribes.

Change
Climate gradually changed and the large forests slowly disappeared, population increased as well as trade with a new monetary economy. On Adalards estate there had been no money and hops were gathered in the woods. With an increase in population and a disappearing forest, hops were hard to come by; it became necessary to deliberately grow hops. That is what is likely to have happened and the increase during the High Middle Ages, A.D. 1000-1300 is visible on a map by Karl-Ernst Behre with a clear center of gravity in the Low Countries and the Nordics (5). There is hardly any written sources to sharpen the picture that is drawn by these archaeobotanical finds.
Later documents granting the right to have tithes of something commonly called hop (vulgariter dicitur hop) are rare. Gripus de Craienbrouch mentioned in one of the documents of the Craienbrouch estate could very well have been the first to get the tithe of hops commercially grown in Poperinghe (6).

Conclusion
Rather than regarding the few pieces of hard evidence of early brewing with hops as strange curiosities, they fit into a logical scheme where hops became ever more scarce with a growing population. Hanseatic beer trade did not suddenly pop out of nothing and we have to draw a more or less uncertain picture of what might have happened beween this and Adalard and various other estates where beer was made with hops as a matter of course. I think Karl-Ernst Behre was right in his analysis that the amount of hops found by him and his colleagues were used for brewing and it never really disappeared in the mean time. It must have been scarce with both disappearing forests and an increasing population. It must have been hard to come by hops and brewing was largely in the domain of common people preparing food and pretty much stayed under the radar. Key about what happened in Bremen was they finally got the supply-chain working (7).

Epilogue
One evasive aspect of this story is in the exact role of Northmen. In my earlier article about grout we meet Nordic people concentrating wort (making malt extract), to make it durable and compact. It is useful for travel, to both eat and/or mix with wort for a stronger beer or with beer for an extra fermentation. There is the finds of hops in various Nordic sites dating back to the Viking era and Northmen roaming around in Northern France, where our hopped beer pops up around the same time.
Tabernaemontanum writes many interesting pages about beer and beer culture from his 16th century perspective in his New book of Herbs (Neuw Kreuterbuch). Right at the start and quite remarkable beer is described as a Nordic produce that ‘heutig tags’ (today) is also made in various places in Germany (8).

Several Swedish provincial laws, which include some regulations that are likely to have their origins in the Viking Age, contain information on the layout of and the directives for the hop garden

[From Town-books, that originate from the 13th century, we know, that around the Brewers-cities Hamburg, Kiel, Braunschweig, Lübeck, Bremen, Rostock and Wismar there used to be Hop-gardens.]

[Beer is a usefull Drink, which in the Nordics where no Wine grows…]

[The kingdoms of Norway and Sweden are the most important countries in the Nordics.
f this is about my translation of Mittnächtigen Ländern as the Nordics; the lands of the midnight sun.]