Beer on board with Willem Barentsz
Before the East India Company was founded the Dutch sought a northern passage to India, which was perhaps faster and less busy with Portuguese and Spanish ships. The latter had wine on board their ships, the Dutch took, besides wine, usually beer on board. When their ship became trapped in the ice they made every effort to preserve this precious commodity and Gerrit de Veer wrote affectionately about their beer in his travelogue.

Jopenbeer
In this travelogue it says 'jopenbier'; a type of beer originating in Poland and by the end of the 16th century it was brewed in various places in the Netherlands (1). If this beer came from Poland it was always in the highest tax category and therefore we think it must have been a very strong beer. Local 'jopenbier' was taxed much lower.

Beer-lovers
The crew were true beer lovers and excellent carpenters; the 'Behouden Huys' or preserved house, made of parts of the ship, was found in 1871 by a whaler largely intact. The ships journal speaks of the big efforts that were made to try and salvage their delicious beer. Some went back indeed preserved, Willem Barentsz sadly died of hibernation during the journey back to the Netherlands. The map below is made by himself, his journey can be followed with dotted lines. The other ship, also shown on the map, went back in time.

Underneath parts of a 1671 book with some lines about the beer and details of the original maps drawn by Barenson. 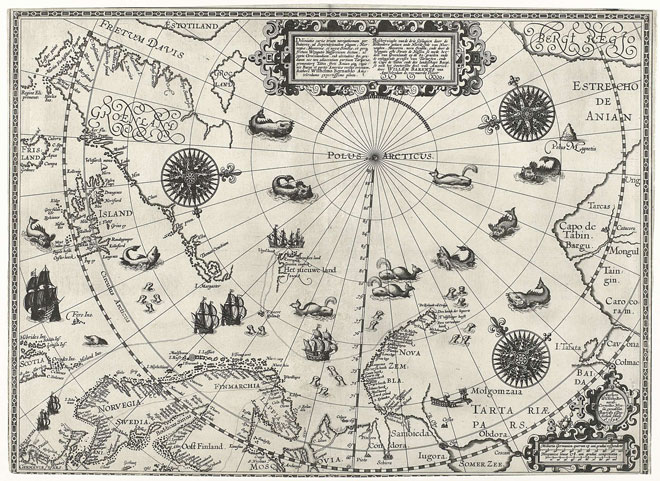 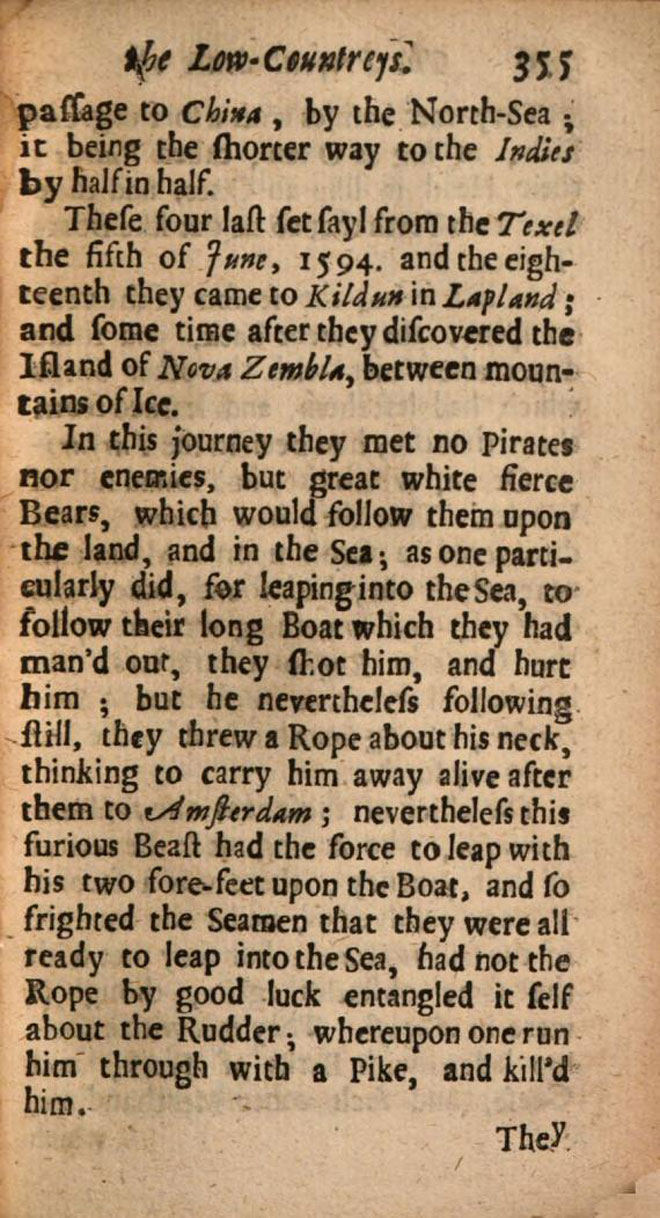 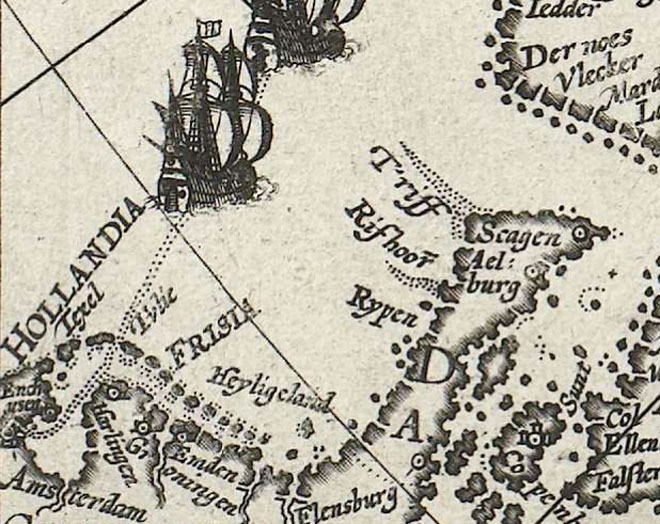 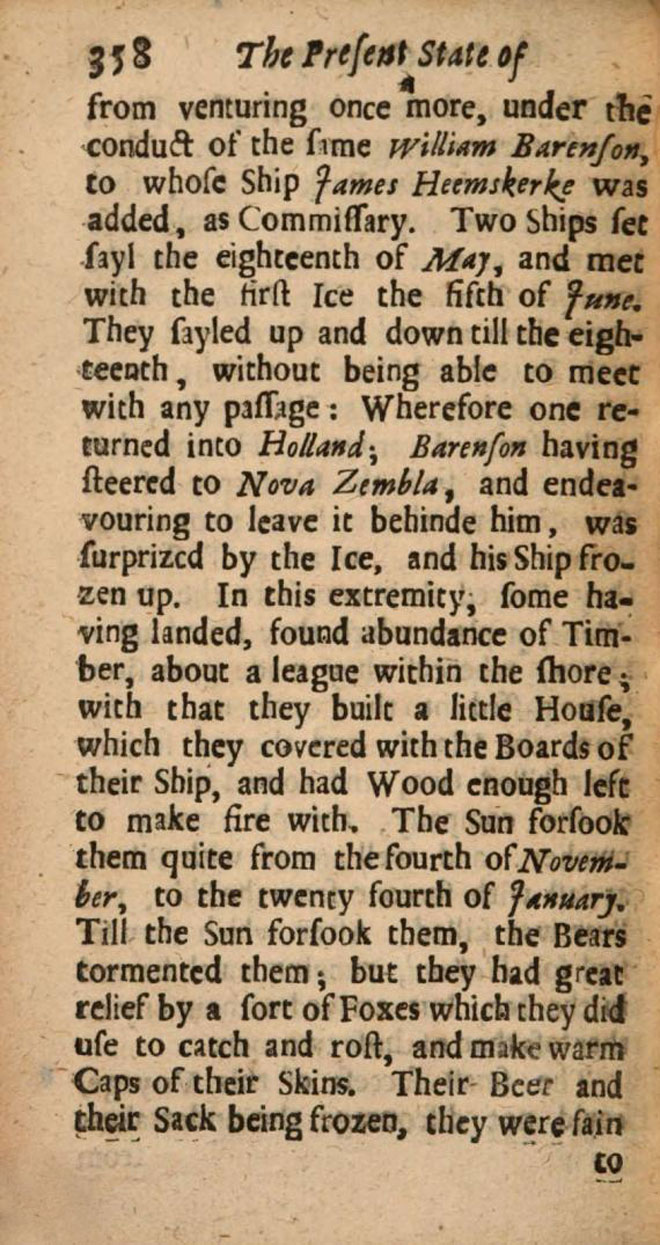 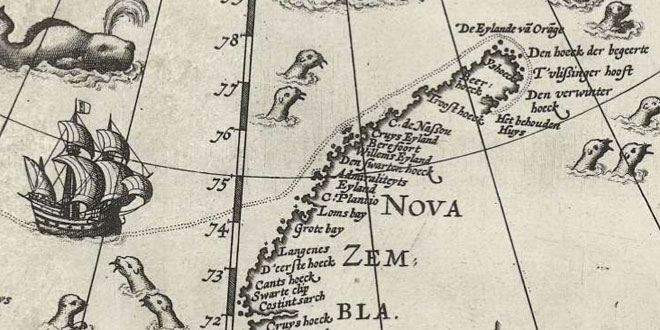 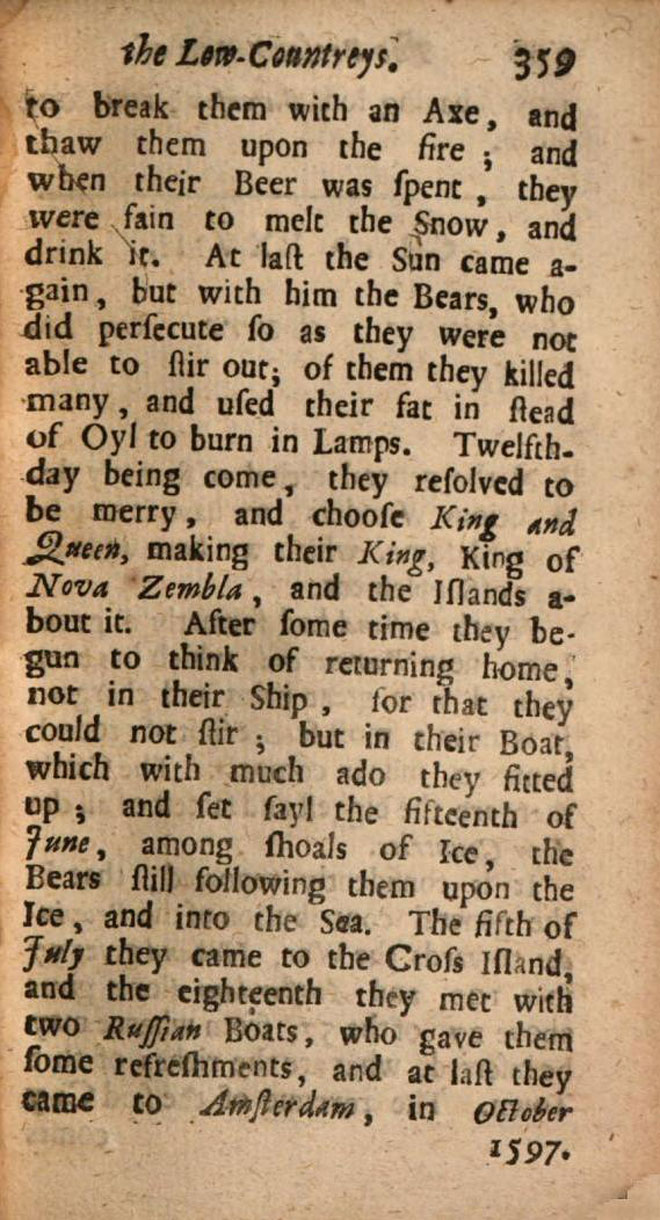 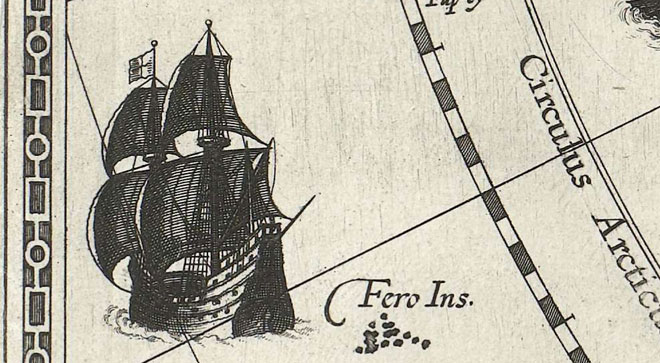 Beschrijvinghe van de drie seylagien door de Hollanders gedaan door Willem Barents.
Circumpolar map of the Arctic region with a piece of Greenland and North America, on the right the north coast of Russia. The route of Barents is drawn with dots and ships. Furthermore Bear Island and Spitsbergen. Drawings of whales, walruses and seals in the sea. 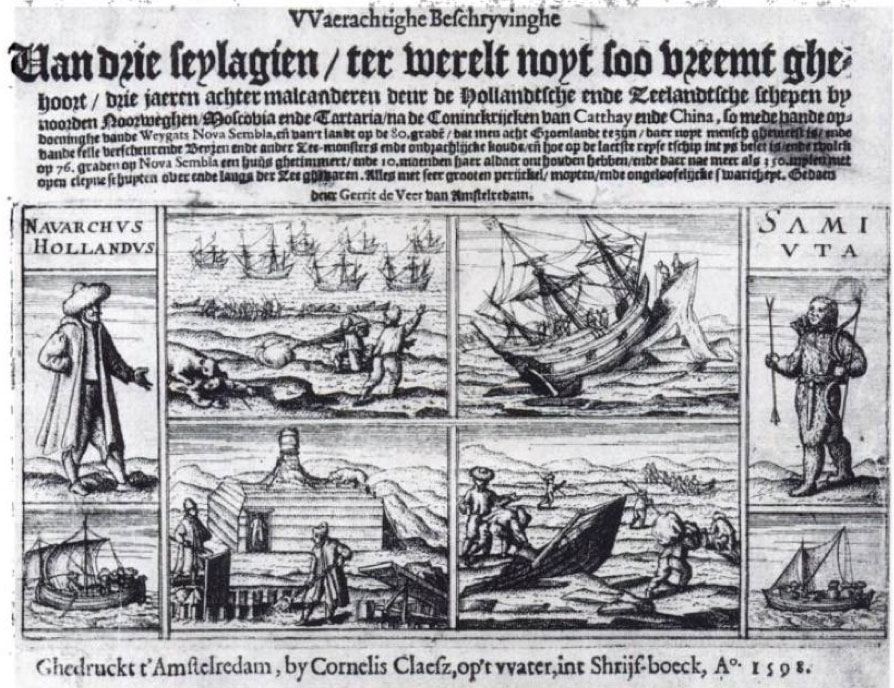 Gerrit de Veer wrote affectionately about their beer in his travelogue

The present state of the United Provinces of the Low-Countries:
as to the government, laws, forces, riches, manners, customes, revenue, and territory, of the Dutch. In three books (Google eBoek)
William Aglionby
Printed for J. Starkey,
1671

[most Joopenbeer was frozen.
thawed, this drink that was so beneficial for them had lost most of its strength and taste.] 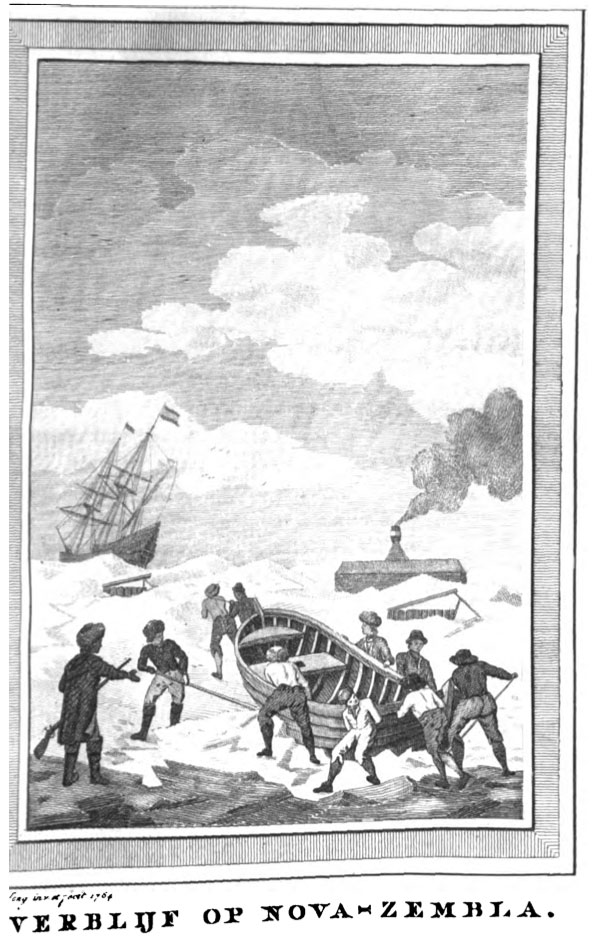 Translated:
[After the original journals

October 14th we once more came out of the ship and found the barrel of Jopen beer, that we had to leave earlier, frozen to the surface; but because of the great cold the beer that ran out of the barrel, stuck to the surface as if it were glued; we hauled the barrel to the house, put it on its side and drank this one first; although we had to melt it first...

Meat and fish we still had enough; but the drink was very scarce; because our delicious beer had lost its strength and taste mostly and was also lost in large, so we had to ration ourselves in this respect.]

p.114
p.115
the beere purged out as hard vpon the side(2) of the barrel as if it had been glewed theron
the Amsterdam Latin version of 1598
p.116
the iron heapes that were vpon the josam barrels(7) 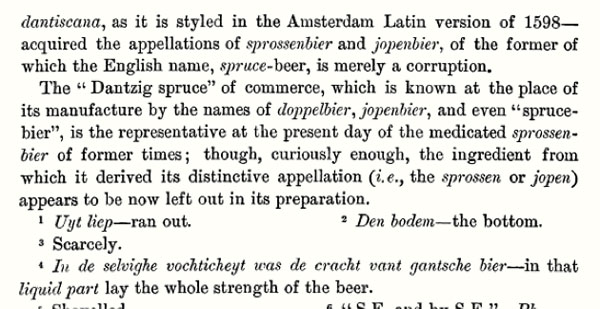 Three Voyages of William Barents to the Arctic Regions 2010 p115 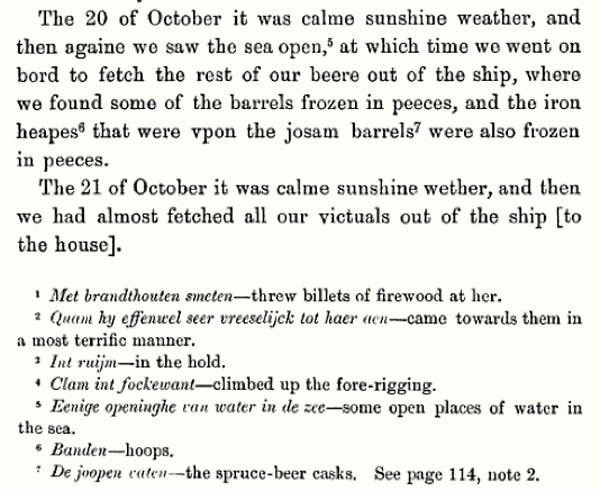 Three Voyages of William Barents to the Arctic Regions 2010 p116

(1)
Note 1
About jopenbeer and sprucebeer
The jopenbeer that's mentioned in the journals had become a generic name by that time. This means it's unsure where it came from, but probably from Holland. In Zwolle, the Netherlands there was production of jopenbeer, but also in other places. The original jopenbeer, long before that time, was from Dantzig, or Gdansk, in Poland. About generic beer-names and early beer-styles I wrote this article.
In the 'Sources about beer' department on this website there is a special category 'Jopenbier'.